In V7, we use slugs and identifiers (alphanumerical values) to uniquely identify objects such as teams, datasets, item and more. This guide takes you through some of the most important you will use and how you can find them.

Dataset Identifiers
A dataset identifier is a string that uniquely identifies a snapshot of a dataset. It is composed by 3 smaller sub-strings:

Slugs here are normalized versions of the values they represent, usually without spaces and with special characters either removed or replaced with hyphens.

For our cars dataset example, a possible identifier could be: andreas-team/cars:latest.

See the SDK documentation on this topic

Team slugs can either be found programmatically or in the UI.

In the UI
In the Command Line Upload section of the data upload pop up after push in the automatically generated commands. So In the example below, v7-labs is the team_slug: 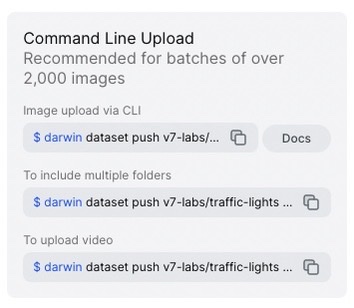 Note: The dataset_slug will be the part after the forward slash. So in this case it would be traffic-lights

Using the SDK:
You can also run the code below using the darwin-py SDK: